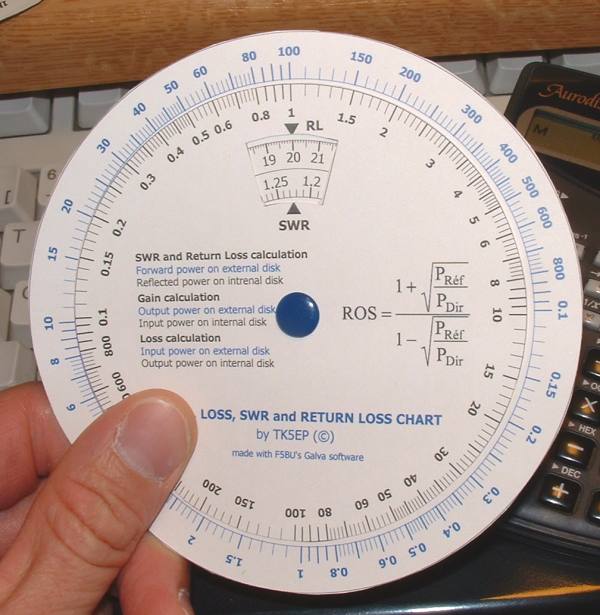 Like me, you probably often needed to calculate a gain, loss or SWR when measuring powers or working on antennas. And when you are on the field, you never have the right calculator or forgot the right formula !

It's a long time i wanted to make a chart that could make me the life easier. I was thinking about a circular chart, but i never found the right tool with which i could do it easily. Until i found the GALVA software written by F5BU.

The result of my thoughts is presented below. This tool can calculate gain, loss, SWR and return loss in a second with enough precision for most amateur works.

The principle is simple, the powers are on 4 decade logarithmic scales, for a 40 dB range. The gain and return loss use the same 40 graduations linear scale and the SWR is a special scale responding to the SWR vs power formula.

To use the chart, you only have to align the 2 powers on 2 concentric disks and you read the result in a small window. There is a short explanation on the disk itself.

Formula and principle of use are printed on the chart.

To build the chart, you have to print this file in PDF format on the heaviest paper your printer can handle, or on normal paper which will be glued on a heavier one

Cut the disks with a cisor, and cut out the window with a sharp cutter.

I gave the largest disk the same dimension as a standard CD, so it can be stored in a CD box to protect it.

A good idea is to plastify the disks for more rigidity and protection against water. You can also use the plastic disks that are sometimes used in CD bundles. They are rigid and make a perfect support for our use !

Than, you assemble the disks with a drawing pin punched through both centers.

The precision of you chart is depending a lot from the precision of the assembling of the 2 disks. I found a good way to achieve this is to drill a hole in the center of both disks with a very thin pin and try to see if they are really concentric.

Rather than bending the drawing pin to keep the disks together, i used another drawing pin from which i removed the pin which left a small hole through which i slept the front pin and soldered all together. I then cutted the surplus. All that makes a nice solid and flat assembling.

Thanks to Jean-Paul F5BU for his nice freeware which is a superb tool, and his advices. The latest version of his software can be downloaded on the author's page.
You can find my scripts in the GALVA packagen as they have now been added to it as an example.
I would be happy to hear your comments about this description.